Caracals are very striking beasts. From head to tail, the caracal measures 830-1225mm, with the tail accounting for 230-310 mm of this length. The short reddish-brown pelage on the back and flanks is contrasted by the white fur on the chin, throat and ventrum. Most notably, the caracal’s ears, which are long and slender, are topped by long tufts of black fur. The colour of the fur is variable: it may be wine-red, grey or sand-coloured. Melanistic (black) Caracals also occur. Young Caracals bear reddish spots on the underside; adults do not have markings except for black spots above the eyes. The most conspicuous feature of the Caracal are its long, tufted black ears, which also explain the origin of its name – karakulak, Turkish for “black ear”. Its ears are controlled by 20 different muscles to help it find its prey.

Caracals are at home in a number of habitats. They are found in woodlands, savannahs, and in scrub forests, but avoid sandy deserts. In Southern Africa, this species is more commonly found in upland areas. Caracals typically use abandoned porcupine burrows and rock crevices for maternal dens but can be found with their young in dense vegetation. The Caracal is distributed over Africa and western Asia. Its habitat is dry steppes and semi-deserts, but also include woodlands, savanna, and scrub forest. It is a solitary, or paired, territorial cat. The Caracal may survive without drinking for a long period – the water demand is satisfied with the body fluids of its prey.

Caracals are found in most regions of northern Africa, the Arabian peninsula, and southwestern Asia. 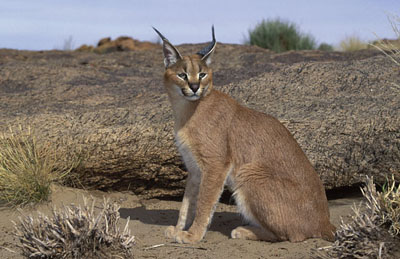